You’ve decided to purchase a new laptop. You set off to your local retailers and discover two models that interest you. It’s a tough decision with many factors involved; price, specification, appearance, reviews and so on. The salesman quickly interrupts you and informs you that one of the models is the last one they have in stock and they won’t be ordering any more in.

Now, which laptop do you choose?

Scarcity is the seemingly unlimited human desire in a world of limited resources. Items that are of limited quantity or that are difficult to obtain are considered to be of a higher value, which plays a huge roll in the consumer decision making process.

Scarcity is based on two psychological traits:

1. Our Desire to be unique

We all have an innate desire to express ourselves, this is often achieved through material possessions; the car you drive, your clothes and the music you listen to are all expressions of your individuality. Of course, in order to be perceived as unique you must possess the things that few others have. This motivates us to seek rare possessions – limited editions and discontinued or banned items that few others have.

2. The threat of loss

Scarcity suggests that we may miss out on something we want, whenever our freedom comes under threat like this we experience a degree of anxiety, items that are scarce restrict our freedom of choice. If the opportunity should arise to obtain a rare item, we are put under pressure to act immediately – in failing to do so we may find ourselves in a situation where we lack that which we desire.

We will happily pay more money for something that is perceived to be scarce. Rare items will also attract more potential buyers, this can often result in highly competitive bidding wars in which individuals, acting on the anxiety of missing out – offer increasing amounts of money in order to obtain a particular item. This is commonly seen on online bidding sites such as eBay, where obscure items are placed within a global marketplace.

Most people should at some point have experienced the feelings associated with wanting what they can’t have, this comes from our psychological resistance to being told what we can or can’t do, again threatening our freedom of choice. Telling someone they can’t do something will only encourage them to do the opposite, hence the reason why society has so many issues with illegal activities.

This principle increases our interest in an activity or item through the illusion of allure, we may find ourselves instantly interested in things we never cared for before, such as the man who was never interested in the woman until she began dating someone else, or the useless purchase we made just because it was part of a limited time offer.

Creating the Illusion of Scarcity

Some items are naturally scarce due to their finite quality, such as oil. As we enter into era in which we consume more oil than we discover each year, the price naturally increases with the demand. In commerce, the illusion of scarcity can be created and used to pressure consumers into making immediate decisions.

This can be applied to:

In order to create the illusion of scarcity, we need only two components to generate a fear of loss:

Let’s look at some examples.

Many eCommerce websites inform the user of stock numbers in order to add a sense of urgency to their purchase. 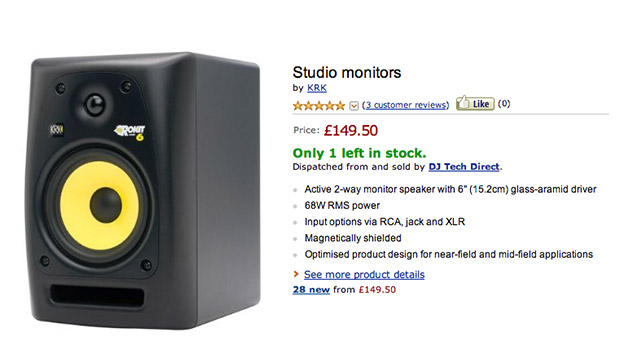 When viewing a product on Amazon, the stock number is one of the most predominant pieces of information, Amazon are placing a high importance on the fact that there is only one left. 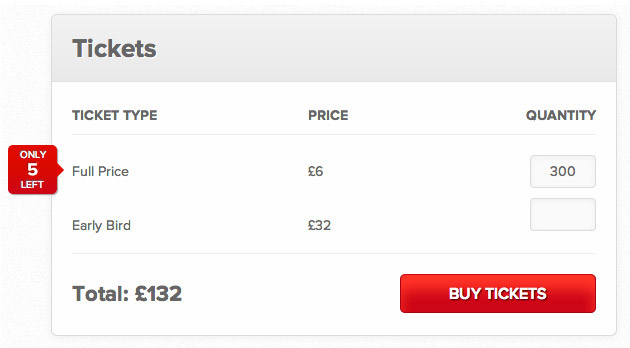 We use this technique in our own product, Get Invited, to inform users when tickets for a particular event are running low. This information appears when the number of tickets available drops below 10%. We’re not using this technique solely to increase our ticket sales, our product is very much focused on quality. We believe this feature contributes positively to the users experience – failing to obtain a ticket for an event can be a genuinely frustrating occurrence and we try to alleviate the user of this potential disappointment.

I used to be an obsessive vinyl junkie back when music was delivered on a physical medium (imagine that?). Collecting records was an expensive and competitive hobby, the medium was naturally limited by the amount of pressings for a particular release – sometimes this could be in the millions, or as small as the hundreds. These small pressing runs produced records of a very high value, if you where fortunate enough to find a copy for sale, it was guaranteed that it would not be cheap. It was not uncommon to pay between £40 – £1000 for a single vinyl. Record companies often released limited edition versions of a release, sometimes these would be pressed on uniquely coloured vinyl which then became highly sought after and expensive.

If a record company repressed a single, the original pressing would rocket in value as people desired to own the original, not the easier to obtain repress. Dubplates (test releases) were highly sought after as usually only a handful were pressed, people would pay ludicrous amounts for these due to their rarity – even though they only lasted for 30-50 plays.

For a Limited Time Only

If manufacturing a limited number of products is not an option, then applying a time limitation can have the same effect – this is particularly effective with digital products such as software, eBooks and MP3s where having a finite number of products does not make sense due to the unlimited nature of the medium. This technique can come in many forms: 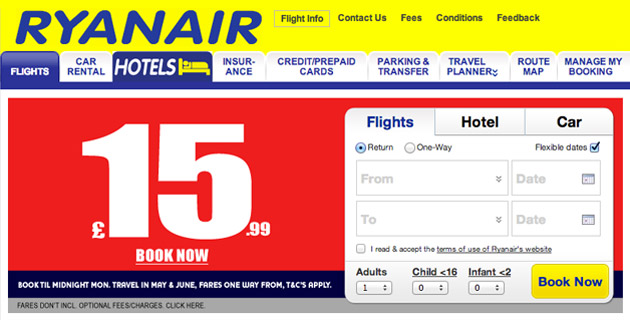 Ryan air offer cheap £15.99 flights, but they must be booked before midnight. It’s unclear from the advertisement where these flights are from, or where they are going to but it grabs peoples’ attention and encourages them to act immediately.

The sale is the most common form of manufactured scarcity, we encounter them almost daily in every retail outlet we visit, both online and offline. These can come in the forms of price discounts or special offers like buy one, get one free that are available for a limited time only. 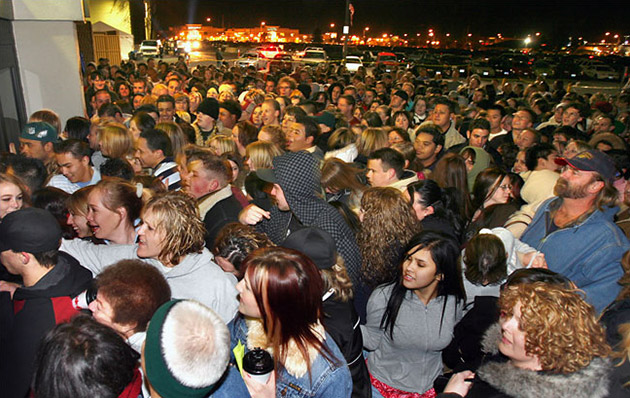 Black Friday is the day following Thanksgiving in the United States when many retailers offer discounted prices during the infamous sales which attract large crowds of people. This often leads to out of control stampedes and riots as desperate shoppers scramble to grab a bargain on this one day only event.

Going Out of Business Sales

This kind of sale combines the fear of losing out on a reduced price with the fear of never being able to purchase from the shop again. These kinds of sales are commonly found in stores in the real world – some may even use this as a deceptive technique. My local Jean Scene were running periodic going out of business sales over the course of 4 years.

In a world were we are used to everything happening instantaneously, waiting for items to arrive via the post system can be a frustrating and unpredictable experience. Amazon offer a next day delivery service, but you must make your purchase within the next few hours. Of course there is a valid reason for this, as items will need to be posted before the last collection time at the post office, but it does put pressure on the consumer to make a decision. Most people are impatient and will want their item to arrive the next day, not 3-5 days later.

When purchasing a ticket via Eventbrite, once you have decided you’re going to attend the event you are subject to a 15 minute timer – if you fail to complete the registration and payment process in this time, your ticket reservation will be released. This feature is for the benefit of other users rather than trying to encourage a purchase, it prevents one user from holding a ticket in reservation for extended periods of time. If someone was to leave this page open in their browser for hours, it would prevent other users from purchasing the ticket – which is highly unfair.

Many TV shopping channels also use this live countdown technique, offering a product at a reduced price for a limited time, ensuring that viewers are put under pressure to act. The timer is generally set to a very short time, never exceeding the length of the programme (30-60mins).

You can exploit peoples’ natural curiosity and fear of being excluded by offering special privileges for members. Many sites use a freemium business model that provides free tutorials for everyone which helps to draw people onto the site. Users then have the option to pay for premium content which only members can access. 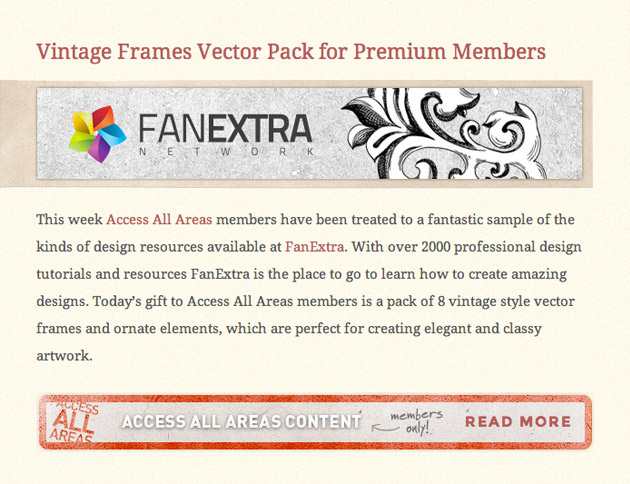 Chris Spooner uses this technique on his blog, offering a range of free content and additional premium content that only paying members can see.

A more extreme version of the special privileges technique is using an invitation only system, ensuring that only a select group of individuals can access a product or service. 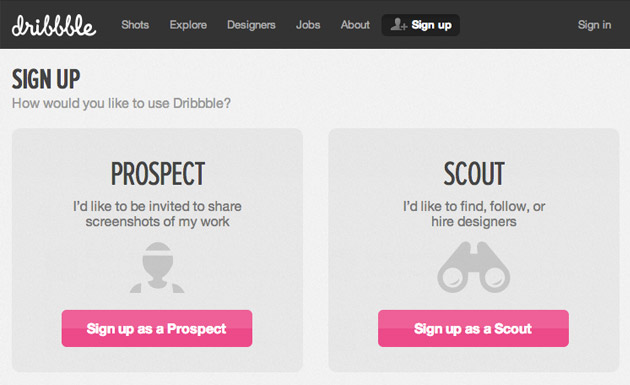 Dribble, the online showcase for designers uses an invitation system in which members must be invited to join, this achieves two goals:

Dribble, the online showcase for designers uses an invitation system in which members must be invited to join, this achieves two goals: Mailbox, the email application for iOS used a queue system to recruit new users, ensuring control over the number of sign ups occurring simultaneously and preventing a server overload. The main problem with using an invitation system is users intolerance to waiting, if it takes to long to process an invite then people will likely have forgotten about your product or worse – they will hold a negative view as a result of their frustrating wait.

The most powerful tool for invoking the effects of scarcity is to remove something altogether, this can come in the form of discontinued or banned items. The most famous story about this comes from the Bible, where Adam and Eve were told not to eat from the fruit of life – which of course, being told not to do it only encouraged them to do the opposite. If you find yourself in a position where we you can’t do something about your lack of having, then you remain in a helpless state of wanting.

When The Exorcist was originally released in the UK a number of town councils imposed a complete ban on the showing of the film. This led to the bizarre spectacle of “Exorcist Bus Trips” where enterprising travel companies organized buses to take groups to the nearest town where the film was showing.

I vaguely remember paying over the odds for a crude VHS copy of the film from ‘under the counter’ of a second hand video store in the late 90s.

It’s much more difficult to ban items online where people have the power to enforce their beliefs about the freedom of information – videos banned from YouTube quickly appear on other sites and there are sites that make money selling only items that have been banned elsewhere.

The Rule of Scarcity – Get Anyone to Take Immediate Action

Why You Want What You Can’t Have

Groovedeck [http://groovedeck.it] is a fun little web application that plays your Soundcloud [http://soundcloud.com] tracks on…

Earlier this week, I ventured over to Newcastle upon Tyne with the rest of the Get Invited [https://getinvited.…