Two months ago, while warming a pot of chicken soup over the stove for lunch, the room suddenly began to spin as if I was riding a waltzer after two bottles of Buckfast.

I scrambled into the next room in a haze and lay down on the sofa, my heart pounding so hard I could hear the blood pumping in my ears.

After a few moments, I managed to stand up and look in the mirror; I was whiter than a corpse. For a second, I thought I'd died; I turned around, half-expecting to see my dead body lying on the sofa.

I told myself it was probably low blood sugar, grabbed a can of 7UP and went for a nap.

Upon waking, I felt fine. I had a quick shower before getting back to work and the minute I stepped out I vomited a strange, thick, black tar.

I'd only eaten chicken soup that day, so alarm bells started ringing and
like any self-respecting nerd, I Googled my symptoms. The results encouraged me to seek urgent medical attention, so I went straight to the doctors.

My doctor anxiously explained to me that the black tar was clotted blood, I was bleeding internally and had been for days.

I arrived at A&E and was admitted immediately. The doctor asked me a number of questions, and as I was talking everything suddenly faded into a hazy white mist and reality disappeared.

I regained consciousness to find numerous wires and tubes attached and inserted inside me.

"The ambulance is on it's way for you" the doctor told me.

"But, I'm in hospital" I muttered in my confused state.

"You're being transferred to a special internal bleeding unit at the Royal, they will look after for you"

I was wheeled out to the ambulance and transferred to the Royal Victoria Hospital in Belfast, where I was poked, prodded and then plumbed up to a drip. It was around midnight at this point, so I had to wait until 7am for the specialist to see me.

As I lay there throughout the night, unable to sleep; all the things that I worried about on a day-to-day basis began to melt away and were replaced with paranoid and crippling worries about my health. I contemplated the various outcomes of my situation over and over in my mind and I started to seriously re-consider what was important in life. 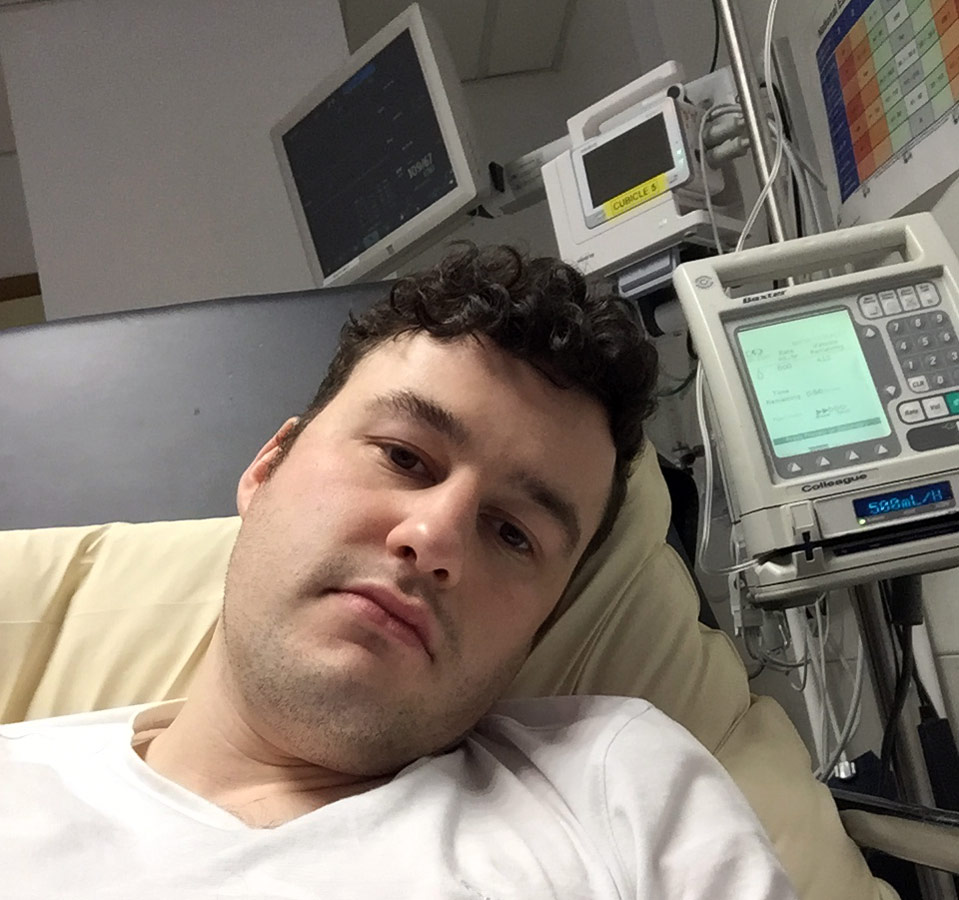 I'll spare the horrific details of what happened next but to cut a long-story short, I escaped hospital a few cups of blood lighter and with some damage to my stomach, but nothing that couldn't be repaired.

My experience was caused by a nasty bacteria (Helicobacter pylori) that had been living in my stomach for several years, and compounded with years of stress-related stomach problems. My stomach had had enough and the lining ripped, pouring blood into my stomach.

I immediately stopped drinking coffee and fizzy drinks. A week later I cut out tea, meat, dairy (almost) and eggs and adopted a plant-based diet.

In addition, I started to give serious thought to my work-related stress levels, and I began to realise...

There is a wonderful delusion about startups, usually peddled by people who have never built or been involved in a startup.

If you listen to the media, you'd be lead to believe that it's all very sexy and exciting to build a company but the truth is – a lot of the time, it's actually really shit.

Startups are glorified everyday and entrepreneurs are encouraged to build big companies and aim for the unicorn valuation in the hopes that some day we'll exit and make a small personal fortune.

However, cold-calling thousands of people, raising investment, pitching to investors, building spreadsheets, dealing with rejection on a daily basis, managing people problems and the constant stress and sleepless nights worrying about running out of cash and how you'll fund your company that spends more than it makes, is anything but sexy. It's soul (and health) destroying.

No matter what you do it's never good enough, you never quite get there. You reach a milestone and then minutes later it's obsolete. It can drive you insane.

Don't get me wrong, the first time you do these things – it's really exciting and you learn so much, but unless you absolutely love the process, you will quickly get tired of it. Especially if you're a creative person who likes making things.

Now, I'm not against venture capital or high growth startups, I'm very lucky to have two incredible investors (hat tip Tim and Mike) who have supported Get Invited from the start and who continue to support us in everything we do, and will be doing. I wouldn't be where I am now without their support.

I have, however, realised there are other options for entrepreneurship. You don't have to build a billion dollar company with 500 employees and raise hundreds of millions in funding in order to be a successful entrepreneur.

If you love the process of doing that, then great! If you don't, then don't buy into the delusion.

We need to start championing the solopreneurs, the lifestyle entrepreneurs and the creative entrepreneurs – people who are building businesses doing what they love, and who are not necessarily trying to scale into a $1bn unicorn.

What about Get Invited?

Get Invited is doing better than ever – we're just refocusing the scale of the business after a lot of soul-searching.

We've been self-sustaining for almost one year now and we recently moved into a lovely new office. We pay the bills, we take a salary and we've just started working with Danielle, who's managing our marketing – and we do all of this from our own revenue which we generate ourselves.

Upon leaving hospital, I took a step back and assessed what we have achieved in just over two years, and I'm pretty damn proud of it. We're a small team, we've built a product that is in use across the world and we're self-sustaining and growing.

This is the kind of thing the startup world doesn't champion. I'd believed that I needed to build the biggest company possible and achieve a $1bn valuation while never stopping to question if that would ever make me happy.

By looking at things differently, I'm much happier and so is everyone else involved. We're doing what we love – building the best product we can and serving our customers. There is also something deeply fulfilling about building a small, sustainable business.

I want to build a business that works and that makes me, my business partners and investors happy without the destruction of our health or well-being in the process.

In addition to Get Invited, I'm going to be launching some new ventures doing other things that I enjoy, too. My goal is to build a suite of businesses doing things I love and fulfilling each of my passions.

I'm currently working with a number of partners to set up a collective of creative business services in Belfast, which will offer user interface and experience design, photography and videography, mobile development and financial services.

Why? Simple - because I love design and I love making things. I feel that I'd be doing myself a disservice if I wasn't doing what I love. The collective will allow me to operate as a designer doing the things I really enjoy alongside running Get Invited.

We started Get Invited because we love building products. I'm a creator and 90% of my time was spent designing the product in the early days. In 2013 we hired Stuart to take over the design and from that point onwards my involvement building the product was almost non-existent.

After a while, I really started to lose my way. I never talked about it, but one night in San Francisco last year, I lay in my hotel room seriously questioning what I was doing and asking how I ended up so unhappy doing something I was supposed to love. No matter what I did, it was never enough.

So, I'm getting back to my roots so I can spend more time doing what I'm passionate about.

I wouldn't be an entrepreneur if I didn't want to change the world, right?

Building a billion dollar company might change your world, but unless you're developing a cure for cancer or eradicating world-hunger then your business is probably not going to change the world in any meaningful way.

It's unlikely I'll do either of these things, but I still want to make a positive impact on the world. I want to help other people free themselves from doing jobs they hate and help them to create their own careers and businesses doing what they love.

So this month, I've started writing a book; a how-to guide on how to uncover your passion and get started as an entrepreneur.

I'm redefining my own perception of success; which isn't measured by how much investment I can raise or big my business is, but making sure I'm doing what I want to do every single day.

It's a blistering hot spring day in San Francisco and I'm sitting with 13,000 people listening to billionaire…

Get Invited Hits Sales of £1m

We recently celebrated a milestone achievement at Get Invited – reaching £1m in sales. You can read the full coverage…