Do you spend your money wisely or do you waste it? Do you spend every penny you make or do you save some each month? More importantly, do you invest any of your money in creating a better future for yourself?

Investing had never crossed my mind until recently. I’d heard of Bitcoin but didn’t know much about it, and it's becoming increasingly difficult to avoid the news about its rapid growth.

I also recently read Rich Dad, Poor Dad (I highly recommend it, get it here) – the premise is that most people work hard for their money, while rich people make money work hard for them. They invest their money in collecting assets, rather than liabilities, so their money generates more money for them in the long-term rather than spending it or saving it with low-interest rates.

The book prompted me to consider starting my investment portfolio, and being the nerd that I am – Bitcoin seemed like an excellent initial investment.

Bitcoin is global digital currency (cryptocurrency) that enables people to send and receive Bitcoins to anyone, anywhere in the world. Unlike traditional banking systems, Bitcoin runs on a decentralized network of computers that isn’t owned by anyone. There is no central authority like a bank or government in charge of Bitcoin, and it isn’t backed by any commodity like traditional fiat currency is.

You store your Bitcoins in an online wallet, which is an app that only you have access to. You can transfer Bitcoins to other people from your wallet much like you would send and receive email.

Bitcoin was launched in 2009, and the number of coins in circulation grows each year until the maximum amount of coins (21 million) is reached. There are currently 16 million in circulation at the time of writing, and there will never be more than 21 million.

Although 16 million Bitcoins have been created in just seven years, it could take until 2140 before all 21 million bitcoins are in circulation. This is because every four years, the number of bitcoins that can be mined is halved, so over time, it becomes increasingly difficult to create more bitcoins.

Where Can You Use Bitcoin?

Although Bitcoin is extremely new and not widely accepted, the number of merchants who accept it is expanding rapidly, and many prominent brands now accept bitcoin, such as: 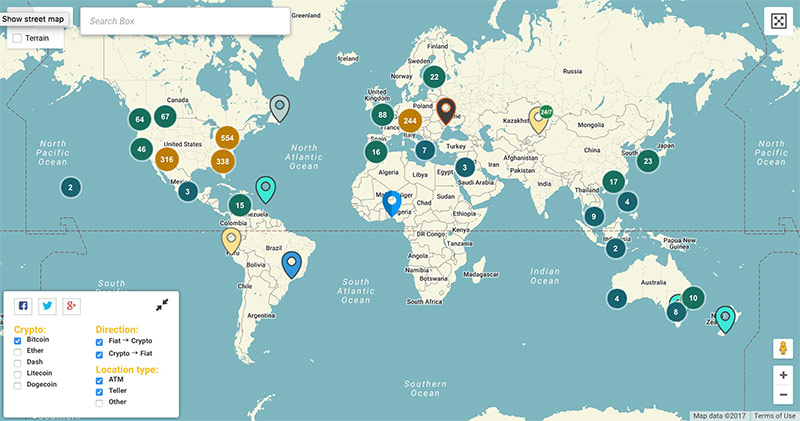 There are also a growing number of Bitcoin ATMs appearing all over the world. You can find them in Thailand, Japan, England, Australia and across Europe. 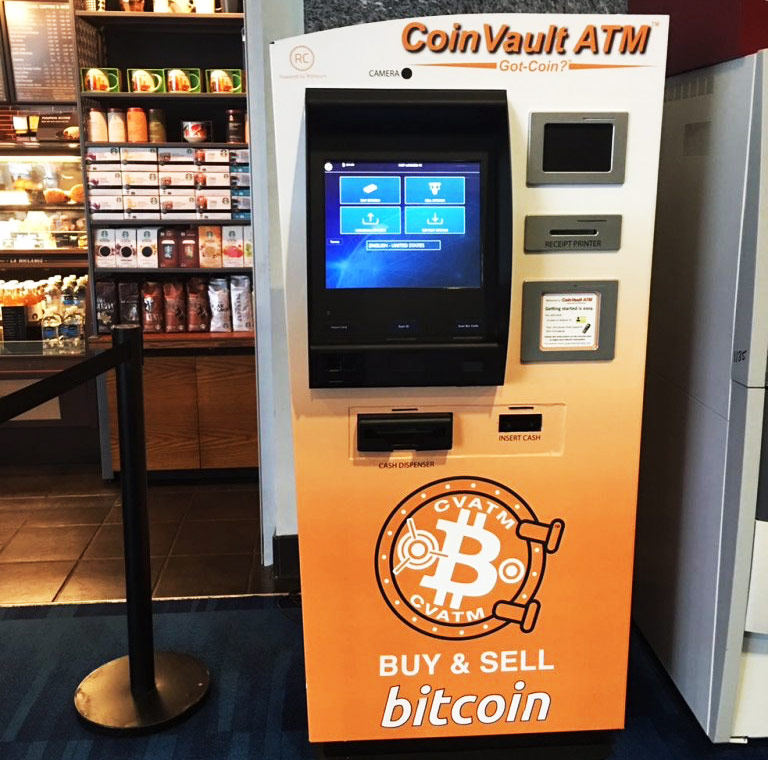 Why You Should Invest in Bitcoin

The beauty of Bitcoin and it's volatile nature right now is that you can make a lot of money with little effort. The barrier to entry is almost non-existent (all you need is a bank account and computer) and there is serious profit to be made.

According to CNBC, a single bitcoin could be worth $100,000 in just ten years, based on a recent report by Saxo Bank, who accurately predicted that Bitcoin would reach $2,000 this year. Max Keiser, a highly respected financial analyst also confirmed this and said we might see a value of $10,000 in the very near future, which doesn't sound unrealistic considering it surpassed $7,000 yesterday.

Given that the value of Bitcoin has risen from $1,024 to over $7,000 in the past ten months, these numbers don’t feel ridiculous.

These are pretty significant increases in a short space of time. If you invested $1,000 in Bitcoin last month, you would have made $650 profit from a few clicks of your mouse.

The caveat here is that the market for Bitcoin is incredibly volatile and uncertain, but it does exhibit a positive growth trend over time.

There is a real risk that it’s a bubble and it may burst soon but then that also might not be the case and the price might x15 in the next ten years as predicted by some.

The critical thing to realise is that now is an excellent time to invest in Bitcoin. 2013 would have been a better time because you could have made a ridiculous amount of profit, like Mr. Smith who turned his $3,000 bitcoin investment into $25 million of profit in just a few years.

As time goes on, the value of Bitcoin is going to increase, so you'll get less for your money, and the growth may slow down and become more stable, so there is less short-term profit to be made.

How To Buy and Sell Bitcoin

Trading Bitcoin is incredibly simple. Unlike trading stocks, you don’t need a broker or to follow complicated investment protocols.

You can get started buying and selling Bitcoin online using an exchange; this is just like the New York Stock exchange only you’re trading Bitcoin rather than stocks. 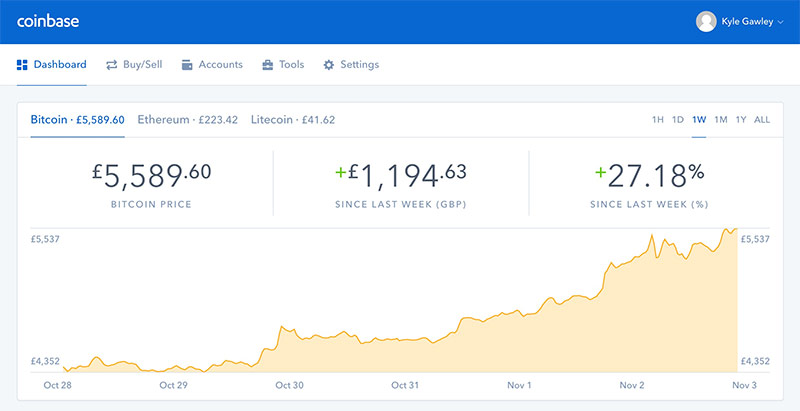 I recommend using Coinbase because it’s simple to use, it's secure and regulated. You just create an account, verify your identity, and you can start buying/selling in a few minutes.

If you sign up with my referral link, you’ll get $10 of FREE Bitcoin when you buy or sell more than $100 on Coinbase.

Although a single Bitcoin costs $7,000, you don’t need to buy a whole coin. You can buy and sell as little or as much as you like, so you can get started with $10 if you want. I recommend starting off with small amounts to get a feel for Coinbase and how investing works. Obviously, the more you invest, the more profit you’ll make it.

The fees on Coinbase are quite problematic when making lots of trades. Once you're confident buying and selling Bitcoin on Coinbase, you'll want to switch over to GDAX which is another Coinbase product for more advanced trading. The benefit is that the fees are significantly less and you can make trades without paying any fees at all. You can sign into GDAX with your existing Coinbase username and password and even transfer your money over for free. 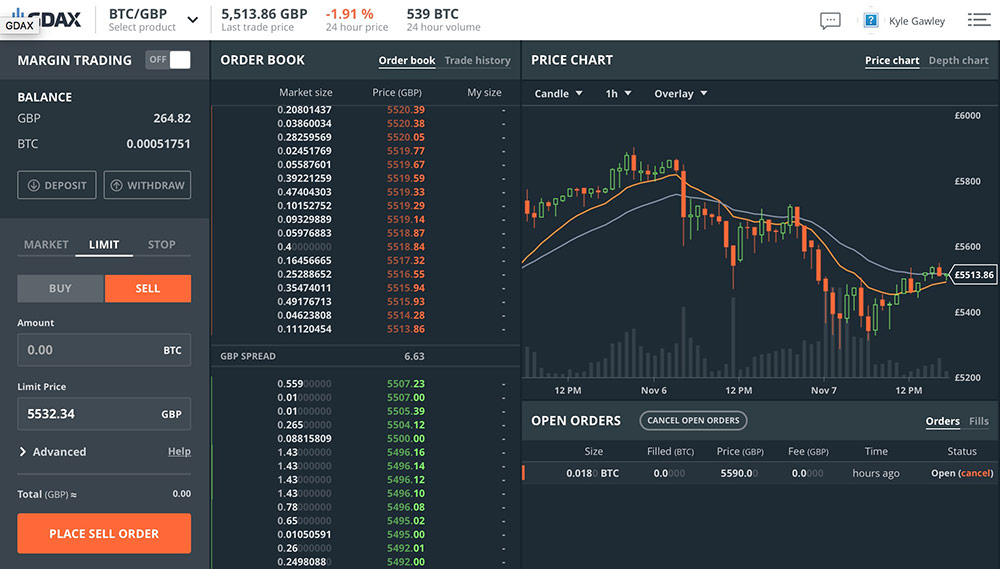 How Bitcoins are Priced

You’re probably wondering why Bitcoin is so expensive and the answer is supply and demand. The price increases when more people are buying Bitcoin, and it’s in high order at the moment because it’s easy to make a profit due to the rapid fluctuations in value. As time goes on and the number of Bitcoins being released decreases and the demand increases, the value will continue to grow.

As the author of Rich Dad, Poor Dad continually points out: profits are made when you buy, not when you sell. You want to be buying Bitcoin at it's the lowest value, and trading at it's highest, even though the value is rising dramatically, there are still low points during the daily cycle in which you'll get more bitcoin for your money. Coinbase will show you the cycle on a neat little graph that is easy to interpret.

When To Cash Out

It’s really up to you when you decide to sell your Bitcoin, you can quickly make trades on a daily basis and make a profit, or you can put your money in Bitcoin and leave it for the long-term.

I’m doing both. I’m day trading to make a daily profit, and I also have some money invested for the long haul.

The Risks Of Bitcoin Investing

Like any financial investment, Bitcoin is risky due to its volatile nature. There is a possibility that it’s just a fad and the bubble will burst, or the government may shut it down, and you’ll lose some or all of your money. On the other hand, it may continue to skyrocket, and you can increase your investment multiple times over.

While there are many supporters of Bitcoin, many people don’t share the enthusiasm. Jamie Dimmon, CEO of J.P Morgan thinks Bitcoin is fraud and a “kind of novelty” that won’t last.

However, you can reduce the risk by following a few simple rules:

1. Never invest more than you can afford to lose

Don’t invest your life savings or kid’s college fund in Bitcoin. Begin with small amounts and then increase your inputs over time when you get more confident.

The Coinbase mobile app allows you to set up price alerts, so you’re instantly notified when Bitcoin reaches a certain level (either it goes up or down). You can quickly set up a threshold then and if the value of Bitcoin drops below it, cash out, and you won’t lose your money.

Learn as much as you can about investing; there are countless articles and videos online specific to Bitcoin investing. You should also be following the latest news articles relating to Bitcoin so you can predict when the value might drop or increase based on positive or negative attention in the media.

Use a Bitcoin Wallet

While Coinbase is a secure trading platform, there have been reports of trading platforms being hacked, so you will eventually want to store your bitcoins in your own wallet. There are lots of options available – both software and hardware – so do your research and decide on which one best fits your needs.

The more you know and understand, the less risky your investments will be.

Have fun investing and don't forget to get your FREE $10 of Bitcoin by signing up for Coinbase here.

Are you happy with what you have achieved in your life? Or is your life a never-ending list of…